04 FebKarim Rashid: From Analog to Digital

Karim Rashid is an industrial design superstar, although he dresses more like a rap superstar than one that reshapes the kitchens and hotel lobbies of the world. As the keynote speaker at Maison & Objet in Paris in September 2015, he leapt on the stage in an outfit reminiscent of something Snoop Dogg (Snoop Lion?) might put together before heading out for night at a Miami club: white suit, silver sneakers and yellow-tinted shades.

That day Rashid the Superstar spoke to an eager French audience in his penetrating American accent on what it means for interior designers to be living in the digital age. He was like a firebrand prophet amongst a sea of elegant flamingos promoting nostalgic design and feminine, soft pastels.

Rashid pointed out the irony that there are streams of blogs and online content about what it means to be living in this information laden, hooked-up era. Yet so few of us actually apply it to our living quarters.

One of the most important watersheds in communication was when Gutenberg invented the printing press in 1453. Yet the impact that had on interior design was fairly minimal. Families had always gathered around the fire for warmth. Now they gathered around it for light to read by. The next huge development changed the focus of the living area to a box: the mighty television set, which began sweeping homes across America and then the world in the 1950s. Suddenly the sofa and wing chairs from the lowest to the highest establishments pointed towards a flickering box.

Sixty-five years later, they still do. Most living rooms are still arranged in the formulaic three-piece sofa facing the television, although the latter is now more likely to be a giant, yawning screen rather than the modest 50 x 40 sets of the past.

Yet, when most of us watch television these days, we are tapping away on another advice. The 24-hour workday and emails on all devices mean – for better or worse – most of us are hooked up to a laptop or an iPad whilst watching Netflix or Foxtel or the Channel Nine news. Yet our sofas haven’t changed direction or design. Few of us have desks in the living room. Rashid pointed out that all our sofas should have inbuilt workspaces. The way we ‘relax’ is different now. It just is. If we accept the world has changed, then just maybe we will be able to relax more. It’s the fighting against it, the clinging to nostalgia that puts a crick in our necks and makes us tired in the morning. The world has moved from analog to digital and interior design must move with it.

This principle flows through much of Rashid’ work, from his streamlined bathrooms and taps that almost automate the act of washing, to his hotel lobbies in Berlin that mix sensual minimalism with bright bubble seats that mould comfortably to the bottom of the sitter. He wants his designs to be beautiful but also innately functional – the embodiment of the famous term that ‘form follows function’. 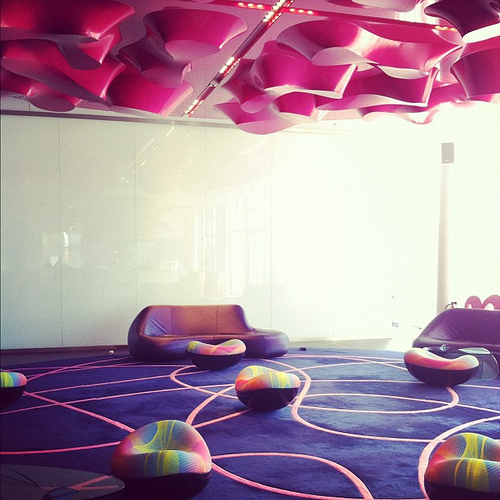 Take a look through Karim Rashid’s design ideas at www.karimrashid.com and see if Australian designers think form should follow function at Decor + Design 2016, 21 – 24 July at the Melbourne Exhibition Centre.